Retail Trends – What does the future hold?

This article focuses on a short review of the retail market in South Africa over the past 2 years; 2006-2008 as well as the focus on the next two years until 2010.

The shelf life of this Shopping Directory will take us until the end of 2010. By that time we would know how successful the soccer world cup tournament was handled by South Africa. We would also be one year into reign of a new government and a new president. These are probably some of the more known major issues that will affect South Africa, but there are many more that create a lot of uncertainty.

During the last four years, South Africa and the world have experienced amongst the highest growth rates in recent decades. China has continuously been growing at a rate of 10%. The growth in other eastern countries also showed the same tempo of growth. The rest of the western world maintained their high growth. Many African states were achieving growth of more than 5% per annum. South Africa has experienced positive growth in 42 quarters with some above 5%.

Table 1 gives an indication of how economic conditions in South Africa have changed since 2006. All growth indicator arrows were green indicating a very positive period during 2006. During 2007 some of the arrows changed to orange indicating a change in the economy at that point in time. The majority of the arrows in 2008 are red, indicating a negative turn with a direct impact on the performance of the retail sector. 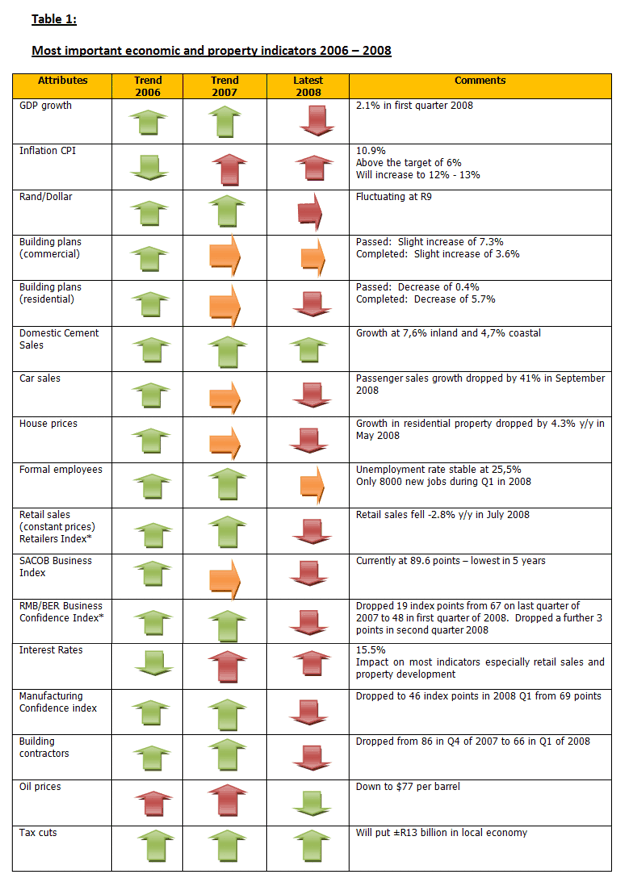 The retail sector has experienced very high growth in the supply of new shopping centres since 2000. The current retail space under construction will further increase retail space by another million square meters by 2010. See Figure 1. 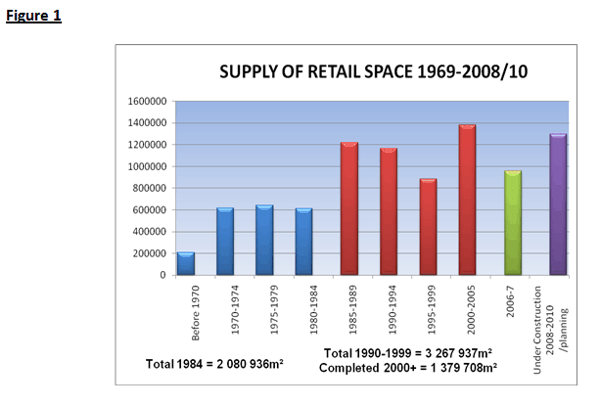 Growth in the retail sector at constant prices has shown a very good increase until the middle of 2007. 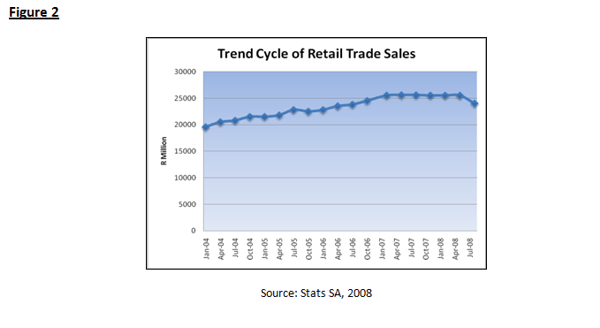 The most important changes during the last 2-4 years were mainly the construction of shopping centres with a new retail format. In the metropolitan areas the focus was on free standing homeware stores, home decor centres like Design Quarters in Fourways and Willowbridge near Tyger Valley in Cape Town. In the United States most of the retail constructed concentrated on lifestyle centres. A few centres in South Africa have used the terminology of “lifestyle” centre, but no real life style centre has been built, except Melrose Arch that will offer something different and a lifestyle orientated destination.

A large number of centres have also been completed in the township areas with Maponya Mall which is the best example of a large centre in a township area. Many retailers are recording very positive performance figures while other stores, specifically the stores catering for the higher LSM shopper, are totally underperforming. A number of smaller centres of between 20 000m² and 30 000m² have been built in other township areas. These centres tend to perform well. The key aspect in the development of these centres is the tenant mix where the focus is mainly on food, clothing, furniture and services. An interesting to keep in mind is that up to 60% of the shoppers walk to these centres.

A number of centres are being built in smaller towns such as Worcester, Jeffrey’s Bay and Vredenburg. For the first time ever old shopping centres are being demolished to make way for new retail facilities. Many of the first generation shopping centres in South Africa (built in the sixties and seventies) are getting very outdated, rundown and are in desperate need for total revamps and re tenanting. Once a centre starts to fill up its vacant space with churches, adult shops and tombstone merchants, the writing is already on the wall for that particular centre. Many malls have also increased in size during the last 2 years indicating that once a mall is well established, it acts as catalyst for further retail growth as well as for other commercial facilities. A number of the malls in the smaller cities have expanded to cater for new tenant categories and to offer a better service to their customers. Very good examples of these are: Waterfall Mall in Rustenburg, Riverside Mall in Nelspruit, Boardwalk in Richards Bay and Midlands Mall in Pietermaritzburg, to mention a few.

Together with all the new shopping facilities provided a number of new retailers also entered the market. The most important of these are the number of different homeware stores, new types of restaurants and more fast food outlets with seating facilities. A number of new cell phone stores as well as new children’s fashion and toy stores also entered the market. The latest is the very successful interactive Build-a-Bear stores with more than 400 branches worldwide.

Cannibalization is one of the serious threats that retailers face in South Africa these days, with the opening of a number of new shopping centres that are in direct competition with other centres. This process of cannibalization will increase based on a number of proposed shopping centres within close proximity to existing centres. A number of new regional centres are being planned within 3-4 kilometres from existing regional centres. This could become a real threat and retailers and developers must clearly calculate the impact of cannibalization. Cannibalization is also one of the most important research topics in the United States at the moment.

The previous period of economic advancement was driven by world growth, new retail formats, excellent performances, construction of many new centres and customers spending beyond their abilities. The world is currently (October 2008) experiencing one of the most uncertain times and world economy has never been tested like this before. Economic outlook varies from negative to very negative with recession possibilities for most western world countries. In spite of this negative world outlook almost, one million square meters of retail space will be completed over the next two years. This is still as a result of the positive mood that prevailed in 2006-2007.

Many of these new centres, for example the large shopping centres in Amanzimtoti and East London will have to start operating during this difficult period. Hopefully interested rates will start declining in 2009 with a positive spin off for shopping centres.

A further problem exists where new centres are being built too big for the current market potential. Many of these centres are built in areas where residential growth has slowed down dramatically. The key driving force in this regard is to make sure that there are enough people to make the centre viable. In these instances a “follow the roofs” strategy should be followed.

In the end, the question of oversupply might be valid in specific localised areas, however, new opportunities will always arise and need to be explored. This will include new retail products and types of retail facilities. The future of retail in South Africa will depend on economic conditions, but also on realistic expectations of both developers and retailers. The increase in expenditure levels of a large proportion of the population will improve retail performances and enable more South Africans to enjoy the variety of our shopping centres.

YOUR PARTNER IN MARKET RESEARCH