During the first weekend of August 2008 Urban Studies conducted primary market research at the Mall @ Carnival near Brakpan. The reason why this is important is the fact that this was the 200th shopping centre in South Africa where interviews were conducted with shoppers. The editor of Shopping SA asked Dr Dirk Prinsloo to highlight the most interesting centres, the most outstanding findings, the most important trends and changes and the way forward for shopping centre research in South Africa.

Which and what type of centres were included in these 200 centres?

All the surveys conducted at the so-called value centres clearly indicate that these centres are different and in most cases complementary to the nearby regional centre. For instance cross shopping between a centre like Fourways Mall and Fourways Crossing is very high.

Township centres are also very interesting, highlighting a trend that between 40% and 60% of the shoppers walk to a particular centre. There is and always will be strong outflow to the CBDs and suburban regional centres.

Very interesting studies have also been conducted at most of the Casinos to clearly distinguish between the gaming and the shopping/entertainment needs of the casino visitors.

A substantial number of surveys were also conducted at a number of community and neighbourhood centres. Most of these centres need to be upgraded and repositioned.

Lastly, a number of commuter orientated centres were included focusing on the impact high fuel and food prices will have on their shopping behaviour. All this information is now being used to clearly position these centres.

The table indicates the percentage of studies conducted at different centres per city.

*Other include cities like Polokwane, Pietermaritzburg, Nelspruit, Witbank and Bloemfontein

If there is any centre you would like to highlight in terms of its research approach, which one would it be?

Cresta is regarded as a wonderful ‘workshop’ because so many of the latest research projects or ideas are first tested at Cresta. Cresta was the first to conduct a survey amongst customers to establish their views on car watchers, extended shopping hours, to calculate the potential for a tattoo parlour, and regular promotions/advertising tracking surveys.

resta was also the first centre where we conducted a very large Black Diamond survey to fully understand their shopping behaviour and needs. Cresta is the one centre where research findings are being used to its fullest to develop regular positioning strategies for the centre.

Is there any other interesting centre that you would like to point out?

Studies conducted at Gateway and Canal Walk were very interesting mainly because both these centres were built at 115 000m² – 120 000m² during its first phase. Centres like Sandton City, Westgate, Eastgate and Pavilion have grown to these sized centres over a period of 20 years plus. Canal Walk and Gateway now play the role of strong super regional and entertainment centres.

What are the most important changes in our shopping centres over the last 10 – 15 years?

The outstanding change in most of the regional centres is the fact that the customer base has broadened from mainly LSM 8 – 10 to LSM 6 – 10 profiles. This resulted in a broader tenant mix in most centres with a wider variety of national clothing stores, eating places and homeware stores.

One of the areas where the most outstanding changes in the demographic and socio-economic profiles are taking place is in the catchment area of Sunny Park Shopping Centre in Pretoria. When we first started conducting surveys at this centre the profile consisted of young single people or older pensioners (all white). The average household income at that stage (late 1990’s) was ±R4 000 per month. The area now consists of mainly young black families with up to 3.2 people per households, earning a household income of between R8 000 – R10 000 per month. Sunny Park Shopping Centre had a city-wide catchment area at that stage compared to a very localized catchment area at the moment.

In the light of all these changes, what is the most important aspect shopping centres need to know?

Tracking surveys were regular surveys are conducted every 18 months to 3 years have become very important. These tracking surveys normally indicate the changes in the primary catchment area, demographics and the role of competing centres. The graph below indicates how Sunny Park Shopping Centre moved from a city-wide catchment area to a localized centre. 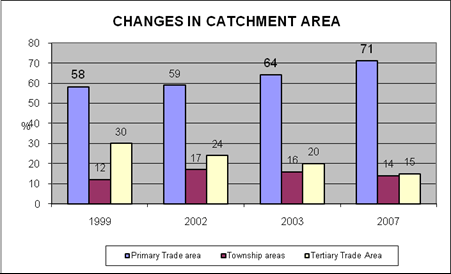 Another very important aspect shopping centre owners, marketers and managers need to know is how any centre compares to other similar type centres. The fact that Urban Studies have completed primary market research at 200 centres enabled us to establish certain benchmark figures for certain key performance indicators. Benchmark figures exist for the different categories of centres including super regional, regional, community and neighbourhood centres. Benchmark figures have also been established for specialist centres like value centres, commuter centres and casinos. One of the newly opened small regional centres has a weekly support of only 48% compared to the benchmark of 65% weekly support. Centre management will immediately know that the centre is still in the first year growth phase. In this case awareness levels should be increased.

What do you regard as the three most important aspects as far as market research at shopping centres is concerned?

The first and most important is the sample size, the way the sample is drawn and the quality of the fieldwork. If the sample is skewed in any direction no clear representation of the profile can be achieved. Fieldworkers must be very well trained and professional at all times.

The second most important aspect is that any shopping centre must be seen in the context of the immediate vicinity. Is this mainly an office worker area? What growth is going to take place in future? How will new competition influence the performance of the existing centre? This forms part of the broader research background.

The last aspect is that the research must be used to strategically position the centre for the next 3 – 5 years. It is also very important to learn from experience gained from other centres. Apart from the fact that Urban Studies has conducted research at 200 shopping centres throughout South Africa, we also gained experience by visiting more than 100 overseas shopping centres.

Lastly, how do you see the future of shopping centre research in South Africa?

A wider list of research alternatives should be provided. There will always be a need for more in-depth intercept surveys, much quicker palm-top interviews where results could be available within 24 hours, telephonic household surveys, immediate promotional tracking surveys and mystery shopper surveys (for more info read the next edition of Shopping South Africa). Any of these methods must be tailor-made to give the shopping centre owners/managers/retailers the best answers to their specific problems at a particular centre.

YOUR PARTNER IN MARKET RESEARCH